Having just passed his 50th birthday, my friend Kerry Winston Ward is planning on writing a book about how to live a full life. He is the perfect person to do that as there are very few people who live lives fuller than his. Since my retirement in 2015 my life has been pretty adventurous by most standards, but when I look back at what I have done over the past couple of years a very sizable portion of my adventures have involved Kerry. On the other side of that coin, Kerry’s adventures that I have partaken in are only a very tiny fraction of what he has been up to in that time. 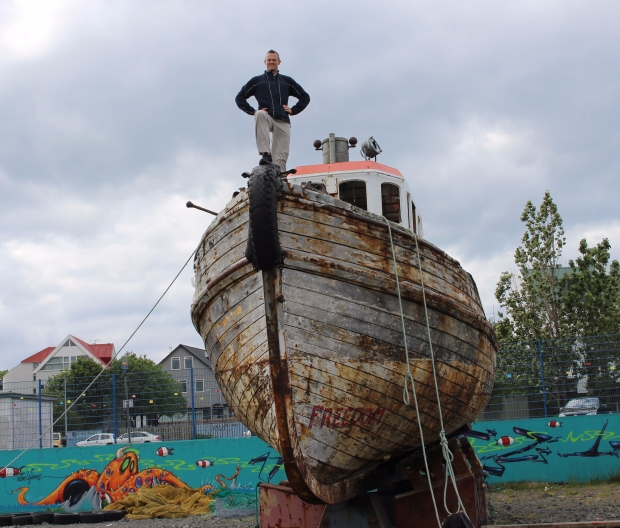 If one has access to Kerry’s Facebook photos, then one can see the incredible scope of what Kerry is up to on a regular basis. I counted 132 albums, each filled with photos from another major escapade and representing travel all around the world.

When I retired in July, 2015, Kerry had a problem. One of his running buddies had invited a group of other ultra runners to help him celebrate his 40th birthday in Iceland where they would all run an ultramarathon. Kerry’s plan was to get there early, rent a camper van, spend 10 days driving around Iceland, and then run the race. He was going to share costs with another friend, but that friend had to back out at the last minute. I, however, was finally free from servitude and was able to step in and replace him. 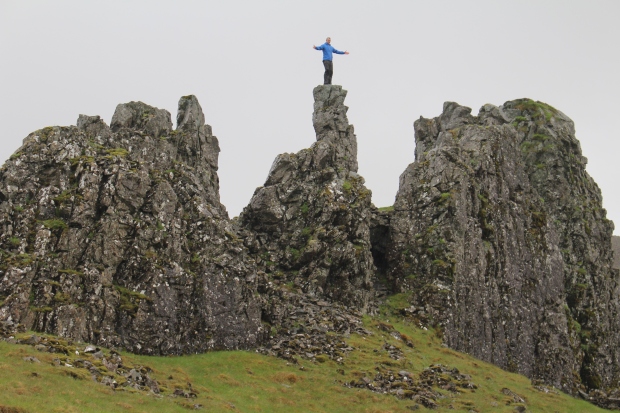 During our first few days of traveling I quickly became acquainted with one of the most salient features of Kerry’s personality. That is the irrepressible desire he has to climb on top of anything he can. He quickly found out that Iceland was the perfect location for him as there usually was no one around who could tell him “No”. Statues, sculptures, boats, obelisks, etc. were some of the features that we encountered and he mounted. Rare indeed was the perfect perch that Kerry passed by without at least some consideration! 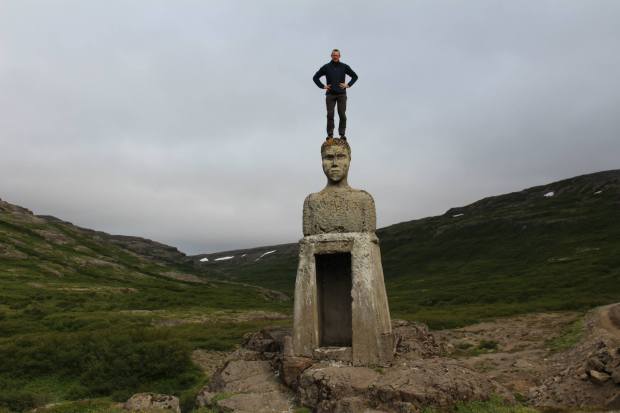 On our fifth day there we were driving through the Fjordlands, and in the Fjordlands the coast road (aka, the only road) encounters many a fjord. We would drive down one side of the fjord until we go to a crossing at the narrow end, and then back up the other side. Most of the crossings were at these dinky little one-lane bridges (Einbreið brú in Icelandic), but that day we came upon a more substantial span. It was kinda long, kinda high, and  supported by arches of tubular steel about a meter in diameter. Kerry’s eyes lit up as we approached, and we pulled over and parked as he said “I can climb that!”

Now Kerry’s travel companions have certain responsibilities. Kerry is really good a self-documenting his exploits (see fulltiltward on YouTube), but sometimes he needs another perspective. Once he scoped out the situation from closer up he positioned me an appropriate distance from the bridge so I could get some shots for him. He then ran up to the bridge, climbed the arch (I think feet and hands at the very beginning and then just casually walking up), spent a few minutes on top, posed a bit, made his way down and came back to me.

“Let me see the pictures,” he said. I handed the camera to him, he took a look, and said “these won’t do. There’s way too much sky.” He explained to me that in this kind of a shot sky is just wasted space, and he showed me the correct proportions. He then handed the camera back and said “I’ll do it again.” He did, I got some acceptable shots, and we were back on the road. That was the first of many lessons for me in the Kerry Winston Ward School of Adventure Photography.

Later that day we came along a microwave relay tower on a deserted headland, and of course Kerry couldn’t pass it up. This time I was prepared to get the right shot the first time since I really didn’t want him to climb this one again! I breathed a sigh of relief when on our last driving day we passed the Hellissandur Loran Mast–at 412 meters the tallest antenna in Europe–and found it closely attended and not a viable target! 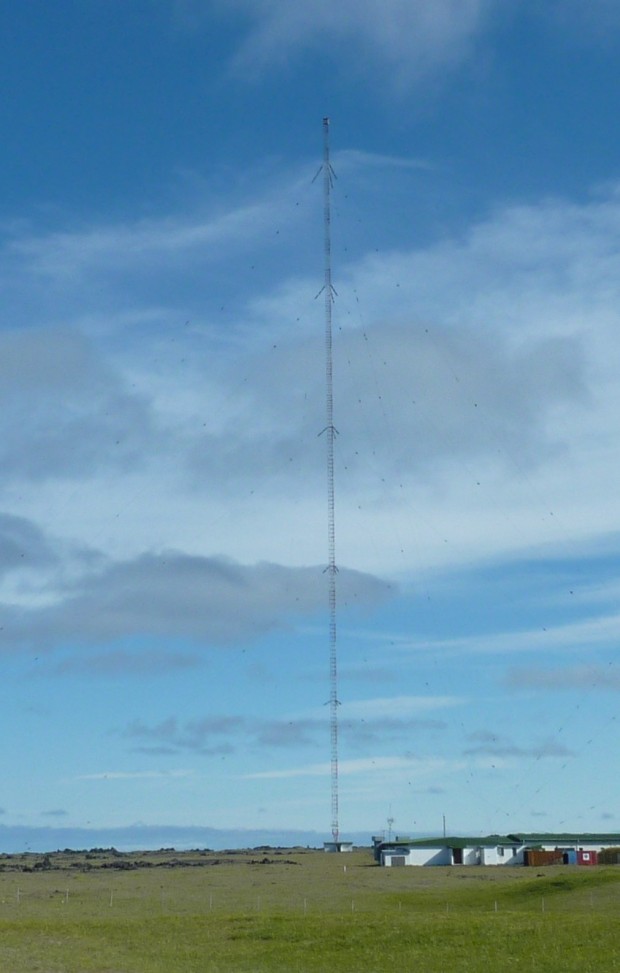 After hanging out for a week or so with the ultra-marathoners at the Moab240 I have been working towards transitioning into trail running. I managed to get in substantial hikes wearing trail running shoes on two consecutive weekends. The first was a ten mile trek in Chino Hills State Park where I came in on the Rimcrest entrance, took Easy Street down to Telegraph Canyon Road, up Telegraph to Sycamore, up to the North Ridge to its end, down to Telegraph, and then back along the South Ridge. Nothing technically challenging except the descent from North Ridge to Telegraph via the power line road.

There was a bit of excitement when I came to a place where there was a lot of snake-sign, and weird sign at that. Snakes make a kind of scalloped trail as they slither through the trail dust, so it is easy to see where they have crossed. In this area it looked like snakes had stopped and just writhed around. While I was looking elsewhere by a very loud hissing and buzzing which was coming from a pair of rattlesnakes very entwined and very upset with me. I waited while first one, and then the other made their way off the road. I did have to save an apparently oblivious runner from a likely snake bite by deterring him from a trajectory that would have put he and the snake in the same place at the same time.

Then on Sunday the twelfth I took a very nice hike up from Santa Ynez Canyon with the lovely and multi-faceted Saya Novinger. Saya is a mountaineer, among other things, but was kind enough to keep the pace to a level that I could handle. The trail is flat through the canyon bottom, and then makes a steep and sometimes technical ascent up to the ridge. Saya and I walked along the ridge to the Eagle Rock-Eagle Springs junction and then headed back. I was kind of concerned about my feet as they were already pretty sore and the descent was a tough one; while it was tough, it was also blissfully short and followed by the long, flat walk to the car. Saya, by the way, is also a singer/songwriter and will be performing her own music on Saturday, 11/25, at Bar Lubitsch in West Hollywood. Set at 8 pm sharp!

Both of my initial training hikes had left me pretty footsore and pretty much knocked me out. In both cases I wound up going down for an afternoon nap and just staying down. Not much endurance, and I attribute that to the fact that I was starting from an absolute minimum as less than a week before the first hike I had been knocked flat by a flu that I am still recovering from. I decided to up my bar up by hiking up the Mount Wilson Trail. I know that at this point in my development the summit is out of reach and that there will need to be a lot of strength development to get there, so I set my sights on Orchard Camp which is about the halfway point at 3.5 miles from the trailhead.

The first half of the trail was a bit steeper than I remembered, another indicator of my lack of conditioning. By the time I got to a new trail marker indicating a trail to Jones Peak/Bailey Canyon I was already pretty tired and still 0.8 miles from Orchard Camp. I sat for a bit, talked to a group of locals who came up from Bailey Canyon via this new trail, and contemplated just turning a round at that point. When I saw another fellow who appeared to be in good shape come up to the junction and just turn and head down I took that as an omen and prepared to head down. Just then an old guy who was walking along with a couple of canes came through the junction and headed up, and so I reversed course and followed. Probably would have been best to follow my earlier instincts.

I went on for probably another third of a mile and came to a section that gave me some cause for concern. The trail here is traversing a steep slope with sandy and exposed soil, and in many places there have already been small slides that have obscured the trail, and I fear that the rainy season will create a lot of washouts here. I turned around when I got to a particularly troublesome spot (pictured) where a cluster of three or four BFT’s (Big Fucking Trees) had been completely undercut by this erosion. They were leaning over the trail, and I think it probably will not be long before they topple.

The base of the trees are 8-10 feet above the trail and looking pretty unstable.

I did okay for about the first mile of the return trip, but eventually the pounding of the steep downhill took a toll on my legs. The next mile was a challenge, and by the last it was pretty much torture. I was very happy when I got to my car as I really didn’t feel like I could go another step. On the plus side, unlike the previous two excursions I was able to go home, have some lunch, take an hour nap, and pretty soon my feet recovered. I could have gone out dancing, but instead opted to stay home and do my foot workout—mostly barre stuff with a bit of Physical Therapy tossed in—so I feel that progress has been made. 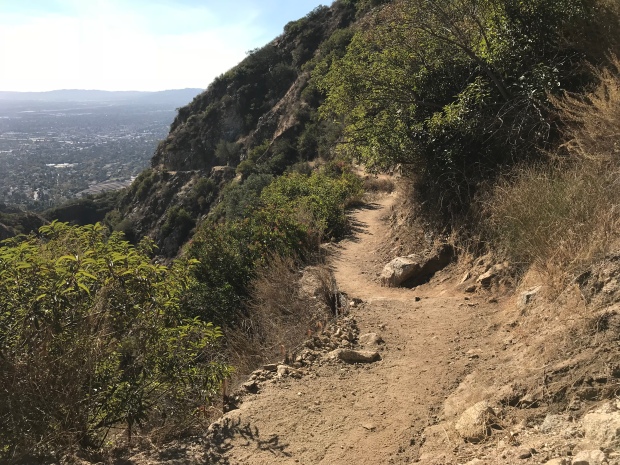 Was I disappointed I didn’t make my goal? Only mildly so because this is not my first trip down this road. My last was in the summer of 2014. My sister-in-law Lori has an older (72) uncle who is part of a group of Coloradans who make a point of conquering at least one 14K summit a year. My brother Rick Novak, MPU*, was invited to go along on their excursion to Mount Sherman that year. Rick invited me, and since I was not in very good shape at that time I began the process of getting so. That involved several attempts at this trail, and I think at that time I only made it to First Water on my first sally. I got a bit further on each attempt until I finally made it top to bottom and still had enough left in the tank to go to a yoga class that afternoon.

I did well on the 14’er. While I couldn’t keep up with my 17 year old cross-country running nephew Jake, I did stay with the 50 year old ultra-marathoner in the group, and was well ahead of the other guys in my age group.

The next step is to build some more strength before I try to hit the MWT again. That requires some long uphill trudging under milder conditions, and the Mount Wilson Toll Road is perfect for that. It ascends from Altadena to the summit over a distance of 10 miles. It is pretty much up all the way (and down on the way back, of course) and gains about 4200 feet. The surface is quite forgiving road almost all the way and great for training. In an earlier incarnation of myself, when I lived reasonably close in the Hollywood Hills, I used to do the entire road about once a month, and my plan is to get back to that level of fitness.

*MPU – The highly coveted Master of the Physical Universe designation