Circus Couture (CC) is an annual circus/fashion show/art auction benefiting the Children’s Speciality Center of Nevada, a clinic that provides care and treatment for children suffering from pediatric cancer whether or not they have insurance. On Friday 10/7/2016 the seventh iteration of CC took the stage at the Joint in the Hard Rock Hotel and Casino with the goal of surpassing the million dollar mark for cumulative donations.

Circus Couture is the brainchild, or perhaps a more apt description would be “heartchild”, of Erica Linz, a self-described “actorbat” formerly based in Las Vegas and currently likely to be found just about anywhere in the world. CC grew from Erica’s early individual fund raising efforts under the banner of the St. St. Baldrick’s Foundation , to her recruitment of others to participate in St. Baldrick’s events as the Cirque do SoBald team, and finally culminating in the extravaganza now known as Circus Couture.

Erica is very high on my list of “Remarkable People I Know”. In addition to being a gifted acrobat and aerialist who was a featured performer for nine years in the Cirque du Soliel show KÀ, Erica also has the heart, the drive, and the magnetism that has drawn an ever-expanding cast of other remarkable folks into her orbit. Like a snowball rolling down a hill, Circus Couture has grown from humble beginnings into a most remarkable fund-raising machine. I too was drawn into that orbit four years ago when I met Erica at JJ’s Gym (aka, heaven for acrobats) in North Hollywood, and this year was my fourth time serving as one of the 200+ volunteers that make this show happen each year, an experience that I look forward to every year.

While the cast of performers in the circus portion of the show changes over from year to year, there is a larger core group of volunteers who come back year after year, many of whom put in countless hours between shows to pull this all together. My role in the production is to assist the lovely Ashley Sutherland-Winch (aka,An American in Macau) in the art auction setup.  When Ashley first became involved in CC she was living in Las Vegas, but last year relocated to Macau. That did not stop her from continuing to serve as a Circus Couture board member, recruiting local artists to donate art for the auction, cataloging all of the child art created by cancer patients, and returning from Macau to play a key role in the setup and execution of the art auction.You can find bios of Ashley and other board members and production staff here.

One of the very entertaining aspects of Circus Couture is the fashion show, and that portion enlists the efforts of a number of loyal local designers who are charged with creating whimsical designs based on some kind of an annual theme. One year, for example, they were required to use only cellophane, and the next year they had to work with balloons! This year the theme was Luck, both good and bad.

The real money-raiser, however, is the auction, and that portion involves several categories. First there are items or services donated by local businesses or individuals, like massage packages, resort stays, tickets to shows, wine collections, or various kinds of gift baskets. The big item in the online, silent portion was a  1963 Fender Stratocaster played by Jimi Hendrix. That item, unfortunately, did not attract any bids; I guess that the $650,000 opening bid was a bit too high for the attendees!

In terms of art, there are pieces that were created by local artists like Peter Lik, 3 Baad Sheep, Don Michael, Jr, to name just a few, and those artists have been contributing works for years. Then there are art pieces created by patients from the Children’s Center, and in that realm the champions are Barbara and Larry Domsky from Domsky Glass. The Domsky’s have been involved with CC from its inception, and each year they host an art party for the kids at their studio. The products of that party compose a large portion of the items in the silent auction. 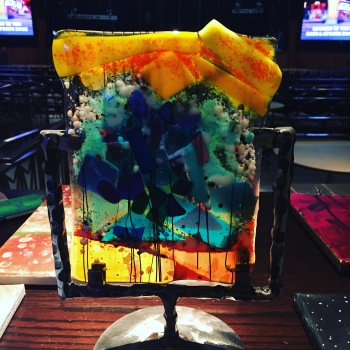 This year something different was tried, and a number of the items in the silent auction were works that were created by local artists collaborating with children. There was one collaboration that was especially poignant, and that was the collaboration between the Domsky’s and the family of young Avery Driscoll. Avery was a 13 year old cancer patient who was at all the Circus Couture’s that I had attended, and at events before I got involved. Avery was the face of Circus Couture and was beloved by all, but she unfortunately lost her battle back in June. 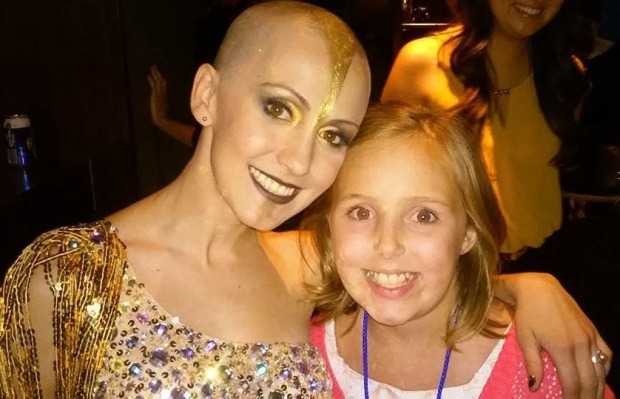 Erica and Avery from an earlier Circus Couture 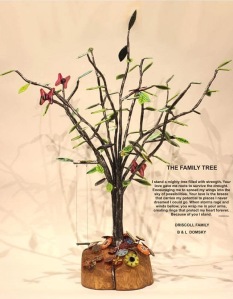 The collaboration was a mixed media metal and stained glass tree. The Domsky’s created the metal trunk of the tree, and Driscoll family members created the leaves out of glass.  It was titled “Family Tree” and it was the last item auctioned off. The opening bid was $5000, and as auctioneer Christian Kolberg fished for a $7500 bid the audience was electrified by a bid from magician Criss Angel for $100,000! Mr. Angel then went on to tell how he had developed a very close relationship with Avery and her family. He then went on to 1) gift the sculpture to the Driscoll’s, 2) donate an ADDITIONAL $100,000 to Circus Couture, and 3) make an additional donation of $100,000 to the St. Baldrick’s Foundation to fund cancer research in honor of his two-year old son who is battling leukemia. I believe the word is mensch, and the total proceeds from the auction were over $154,000. Circus Couture has now raised over 1.25 million dollars!