Gee, I almost let October slip away without any posts! Caught myself in the nick of time. When last we spoke I had just completed the first week of my Pilates/Dance Conditioning (P/DC) certification program at Orange Coast Community College (OCCC). That program has been keeping me pretty busy, and I haven’t even been thinking about blogging,

I have been having a great time in the program! Going in I had considerable experience with mat pilates, but had very limited exposure to the other apparatus. Lately I have had a lot of opportunities to work on the Reformer, the Cadillac, and the WundaChair, and that exposure has been very enlightening to me. This past Thursday I first did a Level 3 workout on the Reformer, repeated the same workout on the Cadillac, and then headed back to Long Beach and Pilates X where I took a mat class. A pretty full Pilates day! 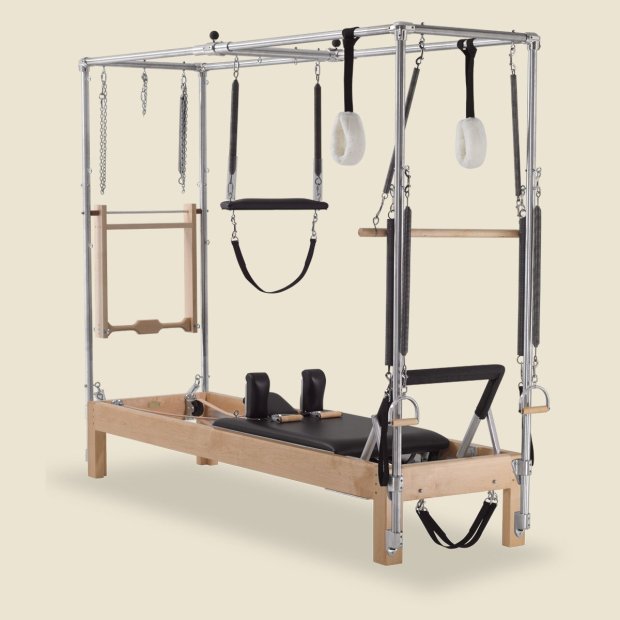 The P/DC program at OCC is not only a wonderful value–other folks have been paying on the order of $5K to do just a Mat certification course at private provider, whereas I will be getting a full certification for under $1K–but it also has a very therapeutic focus that is more in alignment with my own sensibilities. A lot of the graduates of the program wind up working in a Physical Therapy (PT) setting, and that is something that I would also like to explore.

There is also another side benefit. My goal of restoring my body to full function has been greatly expedited by the personal attention I have received from my team–those teachers (Yoga, Pilates, Gyrotonic, massage, and general body maintenance) who I have contracted with to provide me with one-on-one instruction. My classmates and I are all learning to provide the same kind of assistance to others, and my classmates and teachers have been very generous with their attention to my own quest–I feel like I now have a dozen or so personal coaches providing me with loving attention and correction! Feels good.

Waiting for a train–one of the features of life in Franklin Park, IL

Now, about that body. One of the downsides of being back in school is that the time that I can spend on burning calories (hiking, running, biking) has been negatively impacted. The problem was compounded greatly by the condition of my right foot. I had damaged it pretty badly back in mid-August and couldn’t even walk for a rather extended period. It is now only getting back to the point where I can now contemplate some more extensive hiking. Still not ready for running, but I hope to be able to get in enough conditioning over the next month so I can at least finish my next ultra marathon. That event, by the way, will be the Ray Miller Backbone Trail 50K which is (gulp) coming way too soon on December 2.

I have also been away from my ballet classes since the injury, and made my return last week for the Saturday class at Elevation Studios and will be heading over there again shortly. I am not yet ready for jumping and need to take care on the across the floor portion of the class, but I still get a lot of value out of the barre portion of the class. I was excited to return last week and was looking forward to seeing my teacher, Carri Burbank, but sadly I found that she had broken her foot a couple of weeks ago and hadn’t been able to teach. She is, however, expected back today, so I have my fingers crossed!

Things have been pretty slow on the adventuring front. Class commitments and other obligations conspired so that I had to pass up a couple of opportunities to “Hang With Ward” on excursions to Utah for canyoneering and ultra marathon adventures. One big highlight was my visit to my old high school, East Leyden HS in Franklin Park, IL. I traveled back there for my 50 year reunion on 10/13, and one of the activities on the schedule was a visit to the old school, where I and about 30 of my former classmates got a guided tour by Dr. Nick Polyak, superintendent of the Leyden Township school district.

That tour was a very inspiring event. When I attended from 1964-1968 the school was 100% white and very much middle class. The area has since transformed, and the school district is now 50-60% Hispanic. The white population is now only 29%, and according to Dr. Polyak is actually the most diverse population, with 30 different languages spoken by immigrants mostly from eastern Europe. Despite having 70% of their students qualifying for Free/Reduced Lunch programs, in 2014 the Leyden Township District was named the Advanced Placement District of the Year based on participation and passing rates adjusted for the population demographics.

The current successes of the District stem from a combination of a very fortuitous tax base–I once heard that Franklin Park has a nighttime population of 25,000, and a daytime population of 250,000 due to the number of factories in the village–and some consistent and enlightened leadership. Dr. Polyak, who is in his fifth year, is only the fifth superintendent in the 90 year history of the District. East Leyden is now in the midst of an 80 million dollar expansion, not to add students but to allow the students to spread out a bit more. One of the new features will be a daycare center for children of the faculty that will be staffed largely by students who will be earning preschool and daycare certifications.

That preschool certification program is just one of the innovative programs at the school. Leyden Township was the first district in the country to provide Chromebooks for all students. One of the obstacles to providing tech resources to students is the maintenance of those resources, and ELHS has created a student tech support program that allows them to complete 90% of repairs on site by students who will be earning a certification and valuable work experience. There is an extensive machine shop for the Industrial Technology program. Half of the machines in the shop are vintage World War II tools, and the other half are state of the art numerically controlled machines. Those newer machines came at no cost to the District; they were donated by local manufacturers who like to see students coming out of school ready to get to work.

Roger, Judy, and me, with some friends from Cambodia

Finally, as I need to wrap this up, on Sunday, 10/14, I took a whirlwind trip across central Illinois to Macomb, home of Western Illinois University where I earned my Bachelor’s and Master’s degrees. The goal was to check in with my old coaches, Roger and Judy Gedney. They are now both in their 80’s, and Judy is suffering from corticobasal ganglionic degeneration (CBGD) and is now just a shadow of her former self. Roger, who until recent years was still lifting heavy weights also had some health issues in the past year. He had back surgery to alleviate spinal stenosis, and that surgery was a success, but he wound up having two bouts of Methicillin-resistant Staphylococcus aureus (MRSA) infections that caused him much discomfort and required some additional surgery. My time frame was very short, and I was only able to spend just over an hour with the Gedney’s. Judy was unconscious for the entire visit, something that Roger said is all too common these days.