It has been an eventful couple of days! The rain on Friday and yesterday kept me close to home and off my feet, so I have been able to make some significant improvement on my pulled butt muscle. This morning I am able to almost comfortably extend my feet to the chair across and maintain a decent dandasana, which had been out of reach for a couple of days.

I did violate my suspension on Saturday, however, and took the Blue Line downtown for the big march. I got to the Wardlow Blue Line Station at 8:50, just after a train downtown had departed, and noticed some differences from the typical Saturday. First, there was a rather long line of folks queued up by the fare dispensers, and they did not seem to be seasoned riders. Even though a northbound train had just departed there was still quite a crowd on the platform. They had been unable to get on the train that just left.

There were several families traveling together, and I even saw a couple of optimists with double strollers! Everyone who was on the platform managed to get on the next train, but by the time we got to the Green Line we were accepting no more passengers. At each station the conductor had to open the doors to let the rare passenger depart, and then those on the platform would attempt to cram themselves into the open doors of already filled cars. Some of those left behind on the 10 stations from Willowbrook to 7th St. Metro were carpetbaggers like ourselves, but most were locals who were expecting an easy Saturday commute to work, shopping, or recreation, some with bikes or even wheelchairs.

At the Metro Center station I exited to 7th Street and joined the throngs heading for Pershing Square. I got down to Olive and turned left towards Pershing Square, but didn’t get very far. It appeared that Olive was packed completely all the way to Pershing Square, and no one was going anywhere! After marking time for a while the message “Turn left on 7th” began to percolate through the crowd coming from ahead, so I and many others reversed course, went back to 7th, and headed west.

One of the limiting factors for me in considering excursions like this is bathroom availability, and bathrooms were not readily available. I saw a Mexican restaurant on the other side of 7th St., and given that I was about at the end of my range and hungry to boot I stopped for a couple of tacos and to use the restroom. I started a trend, and the restaurant, which had been almost empty, quickly began to fill up. 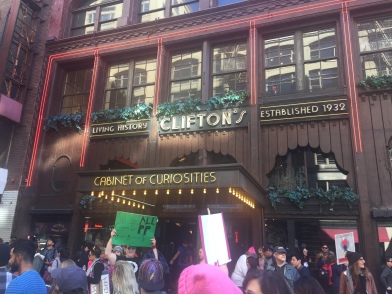 Took Broadway for a while, going past LA landmarks like Clifton’s Cafeteria and the Los Angeles Theater, but that street also filled up, so headed west again and ultimately wound up getting to City Hall on Spring Street.

It appeared that the crowds were way bigger than anticipated as there were a lot of motorists who were stuck in their cars on Broadway and Spring, but all of them seemed to be in very good spirits, even playing music for the crowds. I finally got to Spring and 1st and parked myself between City Hall and the LAPD headquarters to soak up the ambience for a while. Couldn’t get that much of a perspective on the crowd, but it appeared that all of the major streets approaching City Hall were completely packed. Spirits were very high, and the police presence was extremely mellow!

I was quite distant from the action, and feeling a bit of apprehension about the return trip, so after a half hour I decided to head back to LB. As the vertical streets between Spring and Olive were all filled up I headed another block west and made my way down Main St. towards 7th. There were a lot of others with the same idea, and Main was thronged with groups lining up to get into restaurants along the way. While the march was not such a positive event for the local commuters, it was very good for the local restaurants!

Another casualty of the event was the Metro bus service schedules. Northbound traffic on Main was at a virtual standstill, and that included Metro buses caught in the scrum as far as the eye could see. I’m sure there were a lot of folks waiting for those buses who were not very happy.

Eventually I made it back to the 7th St/Metro Center, and as anticipated it was absolutely packed. I did make one good strategic decision and bypassed the stairs to the platform, took the elevator down instead, and managed to squeeze myself onto the train that was arriving at the same time as the elevator.

The trip back was pretty uncomfortable; virtually no one exited the train for the first ten stops, and I found myself shielding a very crotchety elderly black lady in a wheelchair who was coming back from shopping at Walmart, was very tired, did not want to be bumped or touched, and was obviously and vocally very pissed off about the whole affair! The atmosphere improved when she exited at Slauson, but not before she made the young lady who had had the temerity to have accidentally brushed her foot cry by telling her that she was leaving the train not because it was her stop but “to get away from you!”