For the past four years every second Wednesday of the month has seen another incarnation of Speak It Easy: Creative Food for the Soul, and yesterday was no exception. I journeyed to the Callaloo Caribbean Kitchen on Anaheim to see the current incarnation. This was my third excursion to SIE, and once again it was a very worthwhile trip! 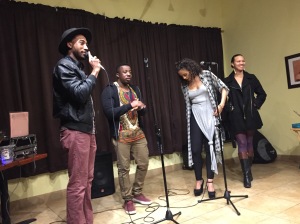 SIE is the result of a collaboration between Donovan Brown (of The Black Noise), Lance Lowe, Samantha Parker, and Shelley Bruce, and is described as a vaudeville show as the founders did not want to restrict the types of expression in the show. Wednesday’s show had spoken word artists, an ongoing painting, several musical acts, a very engaging comedian, and a dance number. 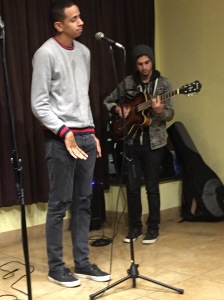 As is usually the case, Donovan was joined by Victor Ujadughele to open the night as The Black Noise, a jazzy-rappy duo with Donovan taking the lead on the vocals and Victor providing the rhythm on his guitar. The Black Noise did a couple of numbers and then turned the mic over to another duo, Tony and Joseph. Tony and Joseph are part of an improv group and were looking to expand their horizons a bit by channeling The Black Noise, with Tony doing the vocals and Joseph strumming the guitar. I didn’t get the name of their Improv group, but if any readers provide me with that information I will be sure to include it.

Then things got really good! In the audience was the lovely Cameo Adele, and rumor had it that she was not planning on performing that night. She did give in to pressure, however, as she is performing a showcase at the Whiskey on the 25th of January and needs to take all opportunities to promote it. She rose to the occasion and improvised a very nice number with Victor. Video included! You can get more information about the event at the Whiskey here. 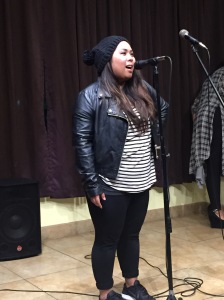 While Cameo was performing I noticed that Denicar Bergancia was in the audience, and that made me very happy indeed! Denicar, along with host Sam Parks and the aforementioned Cameo, make up the a cappella trio Bedlam Lullaby. I have seen Bedlam Lullaby on several occasions and have been enthralled by them. My prayers were answered when the trio took the mic. They performed several numbers, on of which I recorded and can be found below.

Denicar, by the way, also is the creative force behind Harmony Cakes, and she had provided us with a delicious cake that was eagerly consumed at the end of the evening.

Other performers on the evening included Monty Kong, who is a Brooklyn rapper transplanted to Long Beach who turned it up for the evening. There was a very polished spoken word duo, Stephanie and Eddy, who performed as Steady. Stephanie and Eddie, who are also community organizers, have been together forever, but only married for a short time. Also taking the stage was Igi, a very unlikely looking hip-hop dancer who displayed some serious agility and body control. Artist Shelley Bruce was a constant presence and created a painting while the show was in progress. 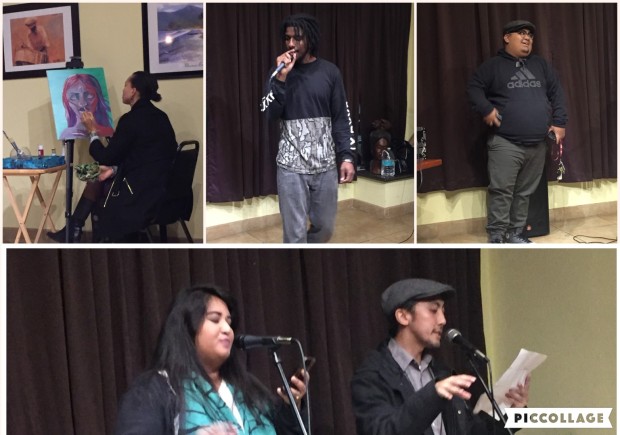 As if I hadn’t already had enough on my plate, there was also a performance by Mardy Mac Fly, a young comedian who had impressed me greatly the first time I had come to SIE. I very much regretted at the time that I hadn’t recorded any of his material, so this time I managed to record it. I am including one clip below, and I have another on my YouTube channel.