It is now Monday afternoon, and I am in a Starbucks in Sandy, OR, awaiting further instructions. I delivered Kerry and his running partner du jour, Dax Hock, to the Timberline Lodge this morning. Their plan was to run the entire Timberline Trail, a 40+ mile trail that circumnavigates Mt. Hood. Since they got a late start this morning (more on that later), they would have been finishing up probably around midnight tonight.

Doug, Dax, and Kerry gearing up for some extreme conditions

Dax is a professional swing dancer and teacher who is the proprietor of The Lindy Loft in downtown Los Angeles. He is also an aspiring trail runner who this summer passed the litmus test by successfully accompanying Kerry on the Cactus to Clouds trail from Palm Springs to San Jacinto peak. This trail packs over two miles of elevation gain into a 15 mile hike up. With the down that is 30 miles, and at the end the temperature was 105 degrees. Dax came through with flying colors.

This excursion was supposed to be Dax’s introduction to running in rain and darkness, but the conditions were a bit too extreme. In the featured picture you can see Mt. Hood in relation to the Lodge, but in the picture from the Lodge there is no sign of the mountain. When they departed from the trailhead it was 34 degrees and snowing heavily with a strong wind. The prediction was precipitation all day, and given the difficulty we had in locating the trail head in the daytime, the prospects for finding their way back here at midnight appeared pretty remote.

About 30 minutes in I got a call from Kerry (luckily there is cell phone reception here, a feature that was absent around Mt. Rainier) letting me know that the part of the trail that overlaps the Pacific Crest Trail was closed and that they were planning of running as far as Ramona Falls and then descending from there to civilization. That would only be about 20 miles and a bit of a disappointment for them, but Dax will still be getting some extreme weather as it is supposed to rain most of the day.

Addendum from the next day–Yes, they did survive their endeavor. About 9 I got a call that they were in a grocery store in Rhododendron and awaiting pickup. They had spent the day running trails on the southeast side of the mountain in the rain. Kerry has a video of the adventure, and if you look from minute 13 on you will see some serious challenges

Now, about that late start. After I finished up my blog post yesterday I hightailed it back to Box Canyon and started hiking up the Wonderland Trail, I had gone less than a mile when it started to rain. I was not geared up for that, so I turned back and called it a day as far as hiking was concerned.

There was a section along the trail where there were a LOT of trees down. It appeared that they were all silver firs, and it looked like they had fallen recently and all at once. My suspicion is that there was some kind of a wind event that took them down. Many of them had just uprooted and toppled, but there were others that had just snapped off. According to Wikipedia, the wood of this kind of tree is soft and not very strong, so it may be that they are particularly vulnerable to this kind of problem.

I then made my way to Ashford where I hung out at Whittaker’s Bunk House at the Rainier Base Camp where I waited out the rain. Kerry and Wing were ending up at Mowich Lake where they had started on Saturday and were planning on driving down to Buckley in Wing’s car which we had left there. The ETA was 9:30 to 11:30.

One problem I anticipated was that they would be ravenous when they got back, only to find nothing open on a Sunday night in Buckley. I checked on what was available and made sure I was there by 8:30 so I could get a giant pizza from Westside Pizza before they closed at 9, and a couple of large milk shakes from Wally’s Drive-In. There is something mystical about a milkshake when you have almost worked yourself to death, and they had been very disappointed the night before when they couldn’t get one.

Then it was time to wait. 11:30 came and went, then 12:30. Around 1 I was starting to look up numbers I would call to report lost hikers when I got a message from Kerry that they were on their way. I was greatly relieved; the weather had been great when they left, but it had started to rain heavily around 1 pm, they had to put in quite a few hours in the cold and dark.

They came in, grabbed their milkshakes and pizza, and Wing settled in for a couple of hours of sleep in his car before heading back to Vancouver and work this morning. Kerry and I headed down the road for the three hour drive to Gresham, where we spent the rest of the night at the rural estate of another professional swing dancer (and host extraordinaire), Doug Silton. We arrived about 4:15, and got up again at 8 for today’s excursion. 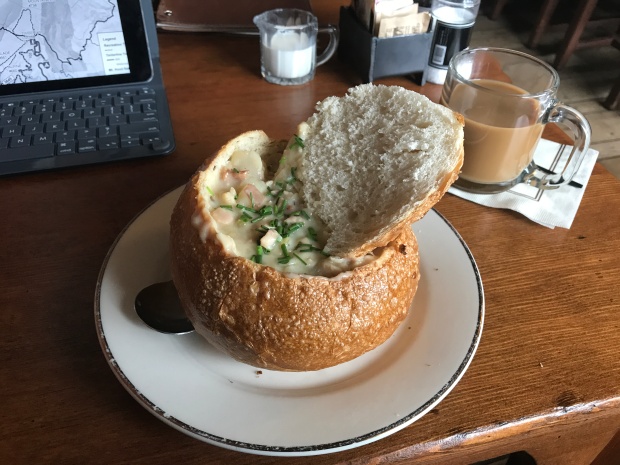 My lunch, clam chowder in a bread boule

I am now wrapping this up and waiting for further instructions. This adventure is coming to an end, and Kerry will be delivering me to the Portland airport tomorrow morning for my flight back to the south land. He will head up to Vancouver. That is, if he has gotten the necessary i’s dotted and t’s crossed to import that car to Canada! I hope he has much better luck than I had!