It is now Sunday morning, 10:23, and I am sitting in the Mountain Goat coffee shop and bakery in bustling downtown Packwood. I was here yesterday afternoon, and not only did they know how to make a proper cappuccino (2 shots in an 8 oz cup with copious foam–light as air), but I also saw what looked to be the last of their daily batch of Breakfast Scones. It looked absolutely delicious, but having just had a cheeseburger I decided to pass on that. 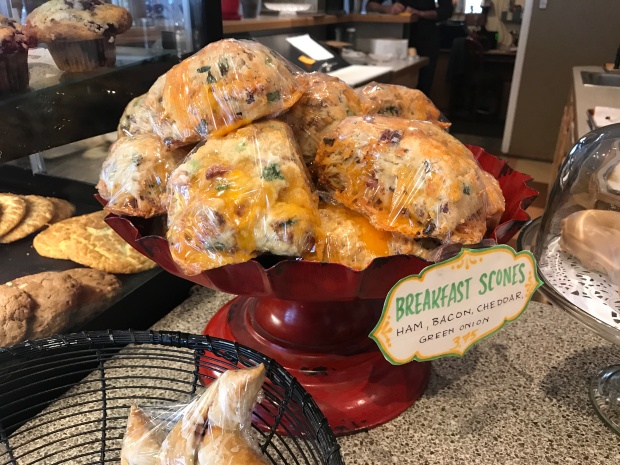 A brilliant idea, and well done

As things worked out I got another shot at it this morning. Once again the lovely Brie made a most excellent beverage, and Patrice brightened up my day with her ever-present smile. I tried to include Brie in the featured image, but like the snow leopard she is an elusive and camera-shy creature.

The lads, Kerry and Wing, were delivered this morning to the Box Gap crossing of the Wonderland trail at 8:30. Last night was a late night, and I let them sleep in until 7, and then it was a search for fuel, both for the car and their bodies. Packwood is kind of a sleepy place, and a lot of the places don’t open early. We were saved by Brenda and the Mobil mini-mart who lovingly crafted some outrageously stuffed breakfast burritos.

After I dropped them I came back down to shower, shave, check out of the motel, indulge my Mountain Goat cravings, and update this account.

View downstream from the bridge

So, what did you miss? I arrived up at Box Canyon, our rendezvous point, about 6:30 pm, and immediately tried to scope out where they would be emerging from. The ETA was 8 – 10 pm, with the acknowledgement that anything close to 8 would not happen. Box Canyon did not appear to be a very good location.

From Box Canyon the road crosses a rather spectacular gorge and goes through a tunnel. On the other side of the tunnel is a parking area, totally undeveloped, and a connector to the Wonderland trail which passes by just 200 feet from the road. I figured that would be the best place to take them out, as to get to Box Canyon they would have had to descend to the level of the stream and then ascend on a paved, tourist-graded essentially road to regain all of the altitude they had lost. Plus, the whole area was as confusing as hell.

So I made a unilateral decision to change the rendezvous spot to Stevens Canyon road. The problem is that there is no cell phone connection, so I wanted to set it up so they would get the message. There was a trail marker at the junction, and I jury-rigged a sign for them. I took a little walk down the trail just for the exercise, but between all the reconnoitering and signage it was already getting dark.

By 8:30 it was totally dark. I set the car up so that I could illuminate the trail junction with the headlights, cut out all internal lights so I could see any light in the woods, and waited. I would flash the headlights every ten minutes, figuring that if they were within a quarter mile or so they might see it. The problem was that they were under-lighted, and only Wing had a light appropriate to night traveling.

Traffic on the road was very light and finally pretty much dried up. Finally a very bright light came around the corner down the road. It was just one light (almost), moving too slow for a vehicle, and was indeed Wing, lighting the way for Kerry (if you look at the video you see a dot that almost looks like an artifact–that is actually the area illuminated by Kerry’s “light”). The nice thing about this pickup area is that the trail parallels the road and has easy access, so they had rejoined the road a couple of miles back.

Saved by the Blue Spruce!

Then it was a race for food! There was a restaurant (which shall forever remain unknown) next to our motel that advertised pizza, steak, and burgers, and was supposed to be open until 11. We arrived at 10:30 and were told, rather rudely, to go away. Luckily, right across the street was the Blue Spruce Saloon and Grill, which was not only quite happy to serve us but provide us with entertainment in the form of karaoke!

One of the reasons these guys do such insane things is so they can eat. They watch their calories, but it is to make sure they keep them up. They split the Big Foot Burger (a full pound) and a rib dinner. Wing, who was allegedly a rock-and-roller in an earlier incarnation, took the stage twice and distinguished himself from the run of the mill karaoke crowd with his air guitar prowess. A little Wing Zeppelin to close out the evening

That brings us back to now. I am now going to plan myself a proper trudge, do it, and then start wending my way back to Buckley. I hope to be able to make it across the south side of the park to Ashford, and from there to Buckley. There was a passel of old folks in old cars who came through here heading in that direction yesterday, so there may be something going on there! 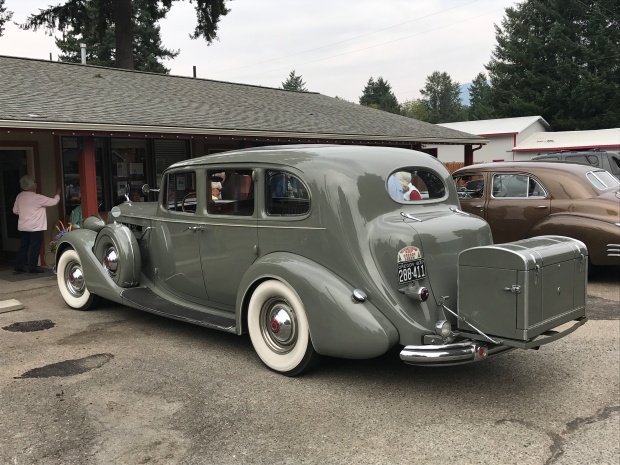