On Sunday, February 25, I braved the freeways and made my way to West Los Angeles. My destination was the Los Angeles Ballet. The event was a reception hosted by the Susanne Thom Physical Therapy center. I was there to see the featured performers for the evening, the spirited dancers from Down For Dance.
Down for Dance (DFD) is a dance program for people with Down syndrome (DS). It began a mere six months ago and was started by Sari Anna Thomas and Annie Griffith, and in that time has already expanded from its humble origin in Orange County to classes at another Orange County location and at Elevation Studios in Signal Hill. 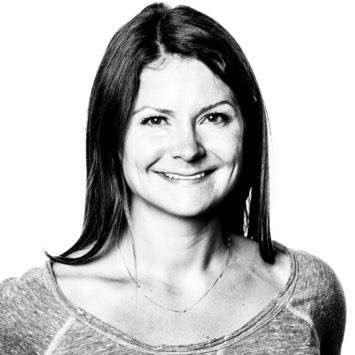 I don’t know much about Annie, and have never formally met her, but I do have an acquaintance with Sari. Sari Anna Thomas is originally from Seattle and migrated to Los Angeles in 2000 on a scholarship to Edge Performing Arts Center. She danced professionally for several years and moved into teaching dance in 2005. Almost 5 years ago she began assisting with a noprofit program that provided movement and social opportunities for individuals with Down syndrome, and then last summer taught a class for an organiztion named PALS. According to their website, “Our mission is to create immersive experiences where individuals with Down syndrome and their peers have fun, grow as individuals, and build transformative friendships.” 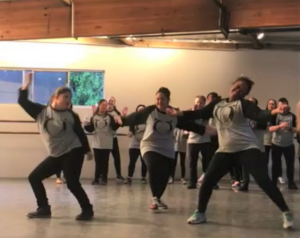 Three years ago Sari began working on a private basis with several young ladies with Down syndrome, and that eventually led her to start her own program. Unfortunately, none of the existing DFD sites are geographically appropriate for her original trio as they are in El Segundo and points north, but that will likely change in the future given the current rate of growth and the apparent need. Currently there are over 30 dancers with Down syndrome participating in the program along with approximately a dozen volunteers who work with the dancers, often on a 1-1 basis. Current participants range in age from 7 to 36, and have a wide range of functional abilities.

I got a pretty good idea about how the program works by watching their performance at the Susanne Thom Physical Therapy gala. The dancers involved were all taking hip-hop classes, and there were just under 20 dancers taking the floor for the opening number. The dancers participating in the DFD program have a wide range of functionality and experience, and that was apparent in this performance. The dancers in the front were the more independent, higher-function dancers who have mastered the routines.

The dancers were first marshaled into their starting positions by the volunteers, Sari spent a few seconds warming them up, and then they were off. Interspersed among the dancers and trying to keep a low profile were a number of volunteers. Their role was to help in modeling the choreography for dancers who have not yet mastered it, and even to physically steer dancers who have become confused back on track.

After the opening number there was a dance by Sari’s original three dancers, and then all dancers took solo turns on the dance floor, hip-hopping to Bruno Mars’ Uptown Funk. Here again I had a chance to see the different abilities of the participants. Some of them were fully independent, champing at the bit, and sometimes reluctant to yield the floor. Others were more diffident or confused, or some combination of the two, and needed to be led onto the floor and sometimes jump-started by a volunteer. Whichever category they fell into, once they were wound up they were all ready to dance!

There were several dancers who showed some real creativity and talent, and Sari was quite excited when I informed her that plans are afoot to add Dance to the Special Olympics. Dance was included on a demonstration basis in the 2017 Winter Special Olympics, and I had read that 2020 was the target for full inclusion. We may have some future Olympians among us!

On Thursday, 3/23 I went to one of the DFD classes at Elevation Studios, where in addition to teaching classes Sari works as the Assistant Director. This was the first meeting of the Thursday class; the Tuesday class has become so popular that they were having to turn students away. On this first day there were only three students, which gave me a great opportunity to focus in on the process without too many distractions.

For this class Sari was assisted by volunteer Dani who was on just her second assignment, her first having come in the Tuesday class. The three students provided a very nice sampling of the spectrum of abilities that must be accommodated in the class. First, there was Robin, an adult male who was quick to invite me onto the dance floor. Robin is the class clown; he wants everyone to partipate, loves being center stage, and he loves to be in charge. Next was Emily, a young lady who loves to shake it, but tends to wander off and needs a lot of direction to keep her on task. Finally there was Diana. Diana is new to the program and needed some coaxing to get her to participate. She was not a fan of hip-hop, but after class she retired to a corner of the room to work on her ballet which is where her aspirations lie. 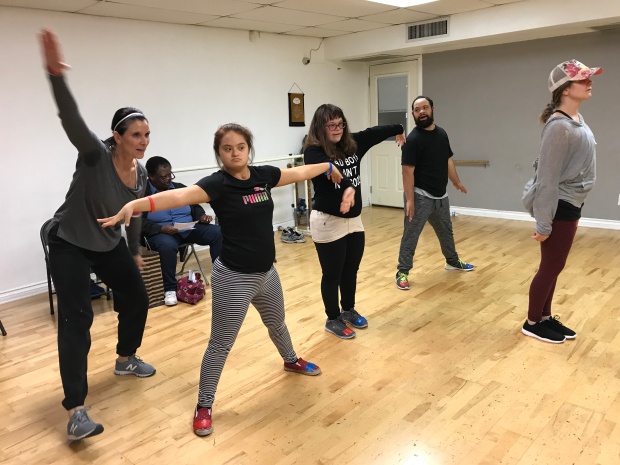 Quite a bit of the instruction for the students is on a one-on-one basis. According to Sari, “There are definitely a number of dancers in our program who don’t need that assistance, where I kind of like to push their independence more. … There’s definitely some dancers who would not be successful in class without a volunteer, and those people just get the one-on-one.” Diana was a perfect example of a student who needed a lot of support, and Dani was assigned to be her special friend for the class. 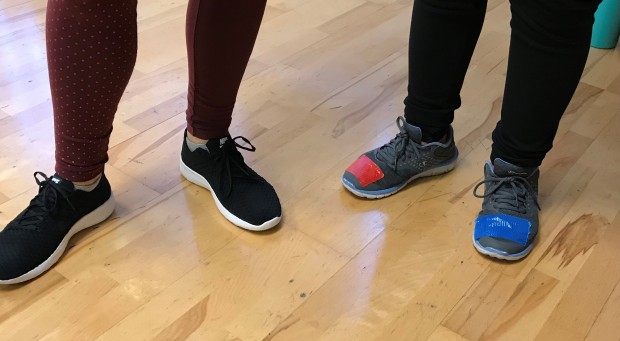 Sari has a lot of experience working with this population, and it was very enlightening to watch her at work. One of the first tasks was the labeling of limbs; much like myself, keeping track of right and left is difficult for some students. Sari’s solution is to use red and blue duct tape on the right and left toes of the students’ shoes, and red and blue wristbands. I am kind of hoping that she would use that method for her classes that I take! I have also take Sari’s classes as a student and was very impressed to see the modifications she has incorporated to make sure that people of all abilities can participate. She pours an incredible amount of energy into her teaching, as do her volunteers! The energy and support of those volunteers is crucial to the success of the program.

Speaking of those volunteers, Sari can always use more “dedicated and committed” ones. It is a difficult job and requires fitness and endurance, but it is also a very rewarding job pretty much guaranteed to result in life-long relationships. Both the performance and the class that I observed were permeated with a tremendous feeling of love and good will. The real concern I have is for Sari. The program is growing so fast that if she hasn’t already cloned herself she needs to do so soon. Maybe she can find a ballet teacher who is willing and able to work with dancers with Down syndrome so Diana can pursue her aspirations.