I had another one of those dilemmas on Saturday, April 29. Rodney Briggs, one of the real stalwarts of the local open mic scene, was scheduled to be the featured performer at the Fox Coffee House Open Mic. I had a prior invitation, however, from a very talented young comedian, Mardy Mac Fly (MMF), who had two weeks before personally invited me to his own event, The FaShow Show at the OC Steel House in Anaheim. 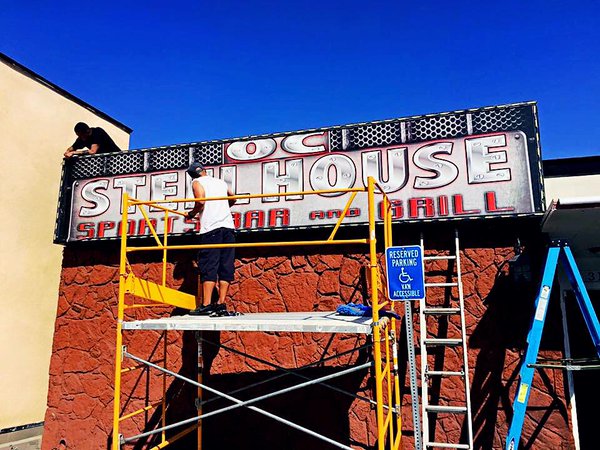 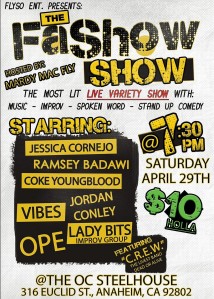 I decided to honor my prior commitment and go to the FaShow Show, a decision that, apologies to Rodney, I am very happy to have made. Mardy Mac Fly’s skills as an impresario and MC proved to be equal to his skills as a comic, and the FaShow Show was a night to remember.

I arrived, at Mardy’s request, over an hour before the start of the show to find out that I was an honored guest. Mardy bestowed on me my new nickname, Cap, and introduced me to the performers who where there. Lady Bit Simone told me that he has nicknames for everyone in the MMF universe, and I am happy to be a member of that august group!

The format of the evening was that of a variety show, a format that I see a lot lately. Speak it Easy: Creative Food for the Soul (SIE) and Scot Nery’s Boobie Trap are two examples. While these shows are all diverse, they do tend to lean towards certain disciplines: spoken word in the case of SIE, and slapstick in the Boobie Trap. The FaShow Show was no exception; while Mardy did have music (2), spoken word (1), improv (1), and hip-hop (1) on the agenda, the talent was definitely (and not surprisingly) tilted towards the three comics who were on the bill.

The time between doors open and the start of the show was filled with the music of a three-piece combo, CREW, consisting of Zach Wilson on drums, Travis Gipson on bass, and Devin Emanuel on keyboard who served as the house band. CREW did not get a solo slot during the show, but those of us who arrived early were entertained by their mix of improvisation and free-styling that spanned a number of different genres. They also did a wonderful job of backing up other acts, particularly during the first set of the night.

That first performer was a young singer/songwriter hailing from Texas by the name of Coke Youngblood. Coke has been involved behind the scenes in music licensing and marketing for over a decade, and he is also a gifted songwriter and composer whose work has enjoyed much commercial success. He recently decided to get out and perform more often, was discovered by MMF, and invited to perform at the FaShow Show. Great move on Mardy’s part! Coke was initially a bit nonplussed by some last minute schedule changes that combined his performance with the CREW, but he rose to the occasion in grand fashion as did the band. The collaboration between Coke and the CREW grew synergistically through his set and was positively electrifying by the end.

There was a bit of a delay before the next artist. Comic Titus Jones was not yet present, and MMF made a call to him (on mic) to find out where he was. Assured that Titus was very close, Mardy and the CREW improvised a little routine showing how easy it is to turn any pop song into a church song. Mr. Jones, aka @turnuptitus, arrived in short order, breathlessly took the stage, and delivered a very funny set.

Taking the stage next was a lovely young lady named Jessica Cornejo. Jessica is an actress, educator, and spoken word artist who delivered two very powerful and moving pieces about relationships. Jessica excels both in the composition and the delivery of poetry, and her performance was one of my personal highlights from the show.

The next performer was yet another talented and very funny comedian by the name of Jordan Conley. Jordan is a self-described “weird dude”, and much of the material he delivered this evening revolved around his voice, which he indicated made him sound like a gay angel. His set was refreshing and very funny!

The run of talented young black male comedians continued as Opeyemi Olagbaju, or simply Opey, took the stage. Opey is just back from the road, and on the road he found himself in a situation that seems to be common to black male comedians on the road–the assumption that if he is performing he must be a rapper. In the clip below Opey tells us how he deals with that assumption.

Next were the Lady Bits, an improv group that began at Cerritos College and has continued to evolve since. The Lady Bits are Melissa Legaspi, Simone Finley, Malory Carrera, Andrea Esparza, and Chloe Avila, and their website assures us that they all have their lady bits. The Lady Bits did a very spirited performance under less than optimal conditions given the dimensions of the room and the lack of amplification beyond their own diaphragms. Their first bit highlighted the multicultural aspect of the night as in involved the only non-Spanish speaker in the cast to translate improvised Spanish text into English. While a certain degree of extroversion is characteristic of all improv artists, even within that select sample Lady Bit Chloe appears to be particularly well-endowed!

The final performer was a Whittier based rapper named David Zapata, aka Vibes. Vibes is a mountain of a man, and he brought along a very spirited posse who all seemed to know all the words to his pieces. Vibes and his crew turned up the heat and provided a very rousing end to the evening.

This was a great show. Mardy Mac Fly is a fine comedian in his own right, but this evening showed that he is also a fine evaluator of talent who loves to highlight and promote the careers of others. I for one am happy to be in the MMF universe, and I hope that this is only the first of many iterations of the FaShow Show.