I have been involved in a long-term project to restore lost functionality in my body, and I have not been doing that alone. All along the way I have used the services of a variety of specialists. As far as I am concerned, those specialists all belong to an entity I refer to as “John’s Team”. What distinguishes those individuals is that all of them have given me the immense benefit of their personal attention to my betterment.

Last June I was in a crisis mode with respect to my core conditioning. I was having a severe case of Pilates withdrawal, and I needed a fix, bad! 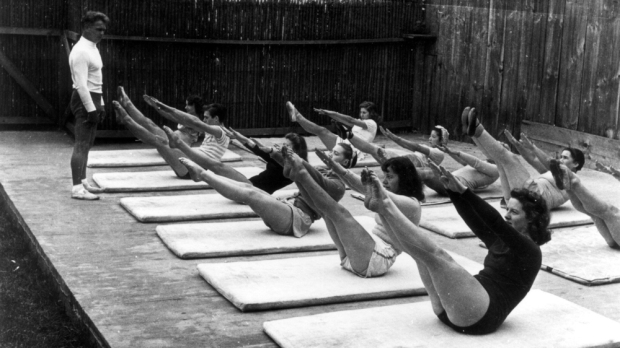 I had been building a pretty good base of core conditioning via Mat Pilates. I always looked forward to the Tuesday-Friday part of the week. On Tuesday evening there was a Mat class at Elevation Studios. Thursday afternoon I would get my fix with Evelyn Grauten’s Mat class at the now defunct Yoga World. 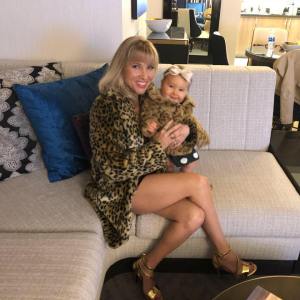 Stephanie and Child (not real fur)

The real treat, however, was my Friday appointment for a private class with Stephanie Levitus Winkler, who would put me through a rigorous hour of a Mat Pilates/Barre workout. The great thing about having a personal Mat Pilates coach is that a good one will take you past the point where your mind starts to fail you and gets you to that point where your body actually does start to fail.

That worked out well until Brooke at Elevation had her baby, Evelyn quit Yoga World, and Stephanie had her baby. All of that transpired between January and May. There were a few weeks where Mat Pilates at Elevation limped along with substitute teachers, but that too died out at the end of their Spring term in June. I was a sad boy! 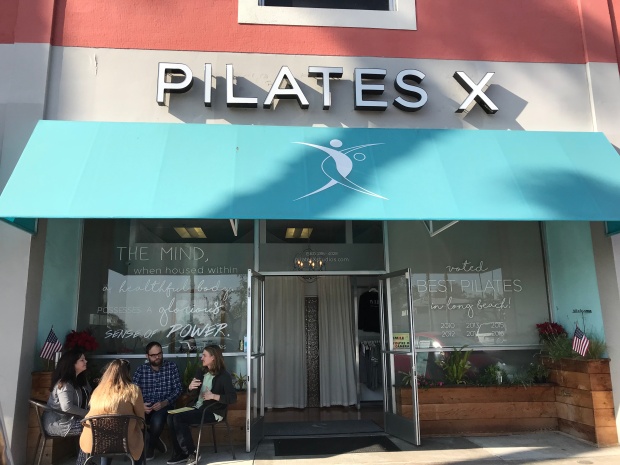 I went a couple of weeks with no Pilates at all, and then I happened across a little place in Los Altos near the Trader Joe’s named Pilates X. They have a Mat Pilates program that is greatly enhanced by their spring wall. The spring wall consists of vertical rails with attachment points for two pairs of springs. One set of springs has a lighter springs with handles attached, and the other has heavier springs with foot straps. A creative teacher can get a lot of mileage out of the potential inherent in such a system, and Pilates X (PX) has nothing but creative teachers! 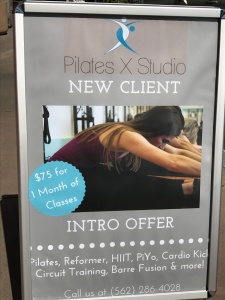 They also have a great introductory offer for new students: one month of unlimited Mat classes for $75, and I took full advantage of that offer. I began a monthlong binge of Power Pilates classes, taking 30 classes in 31 days (they were closed on the 4th or July). They also had a special price available for 3 months of unlimited classes which I took advantage of once my initial month expired. I took a LOT of Mat Pilates classes over that four month span to the great benefit of my core!

I have since cut back to three classes a week so I can fit in more dance classes and ultra-marathon training. There is a fine group of teachers at PX, but my personal favorite is Becky Tyo, aka (in my mind) Mistress Becky!

Becky has a very varied background. Becky was a serious gymnast until she retired at the age of 16. She graduated from college with a double major in Business Marketing and Economics, and then worked in Finance for several years. When she had the first of her three children Becky did one of those 180 degree turns that make life stories so interesting. She spent the next thirteen years working in a dojo where she learned, taught, and competed in Muay Thai kickboxing.

Not Becky delivering a kick!

Her next turn was more like a ninety degree swing. Fifteen years ago she fell in love with Pilates, earned her certification in both Mat and Reformer Pilates, and embarked on her third and current career, teaching at Pilates X.

Becky is an amazing teacher in many ways. She is an awesomely conditioned human being. A good Pilates teacher needs to be really strong. They need to be able to simultaneously model proper technique, do the exercises, and provide a constant patter of instruction and encouragement. Becky is the best at this, bar none, and if there were a competition for “Best Conditioned” among Pilates professionals my money would be on Becky. 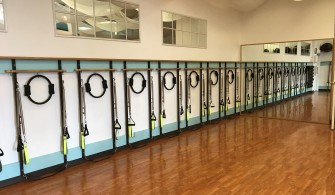 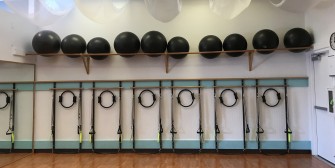 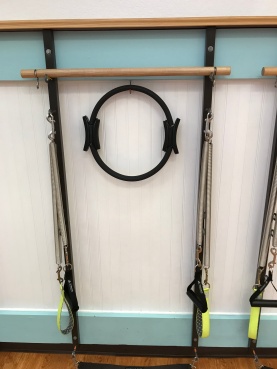 Becky is truly exceptional in her class management. Becky’s classes are typically full –17 wall spots and 3 mat spots are available. A Mat Pilates class consists of a series of exercises done (hopefully) to the point of exhaustion, and there are a lot of changes in the configuration of bodies and equipment required. Mistress Becky navigates through all of those changes seamlessly. She always knows exactly what is next and how to get there. When you take one of Becky’s classes you know exactly what you are going to get: 50 minutes of hell, but a kind that is good for you. My favorite joke for newbies is Q: What is the best thing about a Mat Pilates class? A: It’s only 50 minutes long. Take ANY of the Mat classes at PX and you will get it.

Did I also mention how entertaining Becky is? While she is torturing us she also keeps us smiling with her constant chatter and quite distinctive laugh. Sometimes the music will take her over and she will break into a dance. All of her energy starts spilling out and permeating the room and infecting all of us.

I haven’t yet had a private class with Becky as I have had to cut back on those extravagances (and maybe I am more than a little afraid), but I am hereby adding her to “John’s Team” anyway as my main Core Coach. I have several justifications for that designation.

First, the big advantage of private instruction is that on every exercise the teacher can take you to that failure point where the most benefit is gained. That has been a problem in other Mat classes in the past as the instructors tended to adjust difficulty levels to the level of the students in the class. If all of the students were strong, then I would be challenged. If not, not so much. That is not a problem in Becky’s class because a) it is POWER Pilates so no quarter is given and b) this is Pilates X where EVERYONE is really strong. The latter consideration means that the difficulty level is high enough that I am being taken PAST that point a lot–it is a rather humbling experience.

The second advantage of a personal coach is the individual attention one gets. I do have to grudgingly share Becky with the rest of the class, but she is good enough at spreading that attention around that I don’t feel shorted in that regard.

The Before Picture, but the Current Picture looks pretty much the same.

Becky has been very good for me. When I started at Pilates X I was less than ten months removed from a difficult reattachment of two of the three triceps in my right arm, and rehabilitation of that injury is a main objective. I am happy to report that within the last couple of weeks I have experienced a quantum leap in tricep strength. I attribute that to Mistress Becky’s Plank-O-Rama. Becky has been adding on a 30 second version of a plank each month for the entire year, and December’s addition was the chaturanga. Each version has helped in the conditioning of my triceps, and the final version, just at the perfect time for me, has really done the trick! Well played, Mistress Becky!