Gee, it’s already July, and I forgot to talk about any of the cool entertainment I managed to see last month. Time now to correct that oversight!

The Secret Bowl from last year

The month got off to an awesome start with the inaugural incarnation of the Secret Bowl. Friend Staci Valentine has a property in Beachwood Canyon up near the Hollywood sign, and friend James Combs for several years has been putting together some really fine outdoor concerts there. Saturday, June 2, was the first one of the current season. The featured artist this time was one of my favorites from last season, Abby & The Myth. 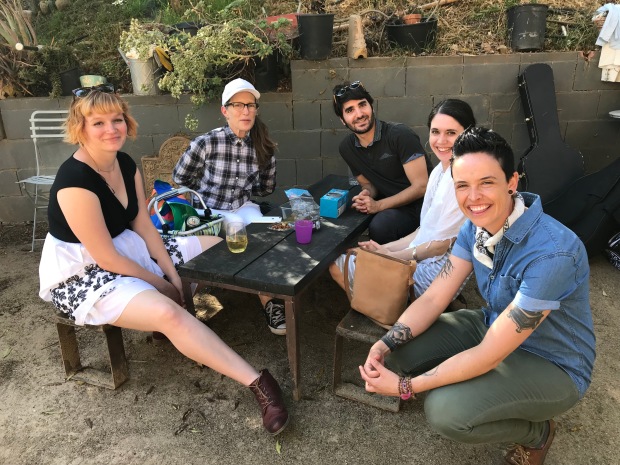 Abby is Abby Posner, and she is a dynamic performer who I profiled in a blog post over a year ago. At that time she had a minimal band with her and still put on a wonderful show. This time she brought along the reconfigured Myth. Stand-up bass player Donnie has been ably replaced by Ellise, and their performance was greatly enhanced by the presence of drummer David and the accordion of Cara.

Also on the bill was a performance by Manda Mosher, who also is part of the country-rock band Calico, and this round of the Secret Bowl concluded with a performance by James Combs and Erin Hawkins performing songs from James’s award-winning band Great Willow.

Nils and band at Spaghettini — Clydene is on keyboards

On Saturday, June 16, I went to Spaghettini in Seal Beach to see a show by Nils (Jiptner, not Lofgren as advertised by Spaghettini on their calendar), a very talented jazz guitarist. My friend from Pilates X, Clydene Jackson, plays keyboards for the band and also does backup vocals. I was transported by the music, and spent the entire show dancing with Clydene’s sister Toni (30 years a professional dancer), even making several pilgrimages through the entire club in an effort to get others on their feet. My mojo was working overtime for this gig:-)!

Tuesday, June 19, was a banner night. I have been trying for a year to get James Combs to book another of my long-time favorites, Cindy Alexander, into the Secret Bowl, but was handicapped by the fact that James didn’t know Cindy. Lo and behold, both Cindy and James’s band Great Willow had received LA Music Critic Awards, and both would be performing on the same stage for a showcase performance at The Mint!

I did get a chance to introduce them to each other early in the evening, but unfortunately  James had an very early flight to catch the next morning and couldn’t stick around for Cindy’s wonderful performance later that evening accompanied by another of my long time favorites, Ali Handal.

I did stick around for her performance, but the real highlight was when both Cindy and Ali joined me on the dance floor during Rusty Young’s (formerly of Poco and NOT Neil Young’s brother) set and I had the pleasure of slow dancing with both of them :-))! Rusty’s comment from the stage was “that guy is having the time of his life right now!” I agree.

Other memorable performances were those by Pi Jacobs, by James’s band Great Willow, a very dynamic pair of sisters named The Khourys, and Rusty Young.

On the next night, Wednesday, I finally took my swing dancing practice live in a trip to Rusty’s Rhythm Club in Playa Del Rey. I took an introductory Lindy Hop class, and spent an hour on the dance floor before I finally ran out of gas. In my defense it had been a busy day: a Power Pilates class that morning, a 12 mile bike ride, and a six mile run/walk in the afternoon prior to heading out in the evening.

This month-long lineup of entertainment conclude the following Wednesday, 6/27, with a showcase performance by the artist formerly known as Deja Nichole, and now rebranded as Mia Sera. I first met Mia when she was a featured artist at one of the lost and greatly lamented Saturday night open mics at the Fox Coffee House. I was very impressed by her at that time, and she was the subject of one of my first blog posts featuring music.

Mia has continued to grow as an artist, and she came through with a dynamic and powerful performance in the Foundation Room at the Anaheim House of Blues. She was second up for the evening, and I was a bit concerned at the beginning of her set. The room was populated at that point by family and fans of the first performer, a very young (12 years old!) singer/songwriter named Ava August, who played an impressive array of covers and original songs. As I had feared, there was considerable early chatter during her first song by the remaining Ava fans, but that was soon quelled as Mia Sera displayed the power of her vocals on the second song. The rest of the night belonged to her.

That about wraps it up for the month of June. Despite my silence through the month, it was a very good month indeed!