My core coach Stephanie was again out of town, so I had another free Friday and I decided to spread my hiking wings again. My right ankle has been acting up a bit again since last week’s hike, so I cut back a bit on my ambition (minimum 10K and 1000 feet of elevation gain) and try something a bit more modest. I lived in Placentia from 2007 to 2013. The downside of living there was the 30 mile one-way commute to work, but there were a couple of pluses, and one of them was the easy access that I had to Chino Hills State Park, so I decided to revisit the park.

To get to the park I took the 91 freeway to the Tustin Ave exit, and then proceeded north on Tustin until it became Rose Ave in Placentia/Yorba Linda, and then Rose to Valencia, right on Valencia to Carbon Canyon road, and right to the Carbon Canyon Regional Park (CCRP). This park is adjacent to Chino Hills State Park (CHSP), and my usual modus operandi is to buy an annual pass for OC Parks and Beaches and park in the last lot in CCRP which is only a couple of hundred yards from CHSP.

On a side note, my house in Placentia was off Rose Avenue just about a quarter mile north of Orangethorpe, and the Burlington Northern and Santa Fe (BNSF) railroad tracks are parallel to Orangethorpe and were always a major headache. Long freight trains occur on those tracks about every 10 minutes and I had to spend a lot of time waiting for trains. At the time I moved the OCTA had embarked on a major project to create either under crossings (at Kraemer and Placentia Avenues) or over crossings (at Tustin, Orangethorpe, and Lakeview avenues) to improve traffic flow. When I moved in 2013 construction had just begun for the Tustin and Orangethorpe bridges, and I was very happy to see that those bridges were now both open. That should really be a boon for home values in areas affected by those bridges.

Chino Hills State Park was a lifesaver for me when I was stuck out in the OC. There are miles of hiking/biking trails in the park, and I spent many an hour doing both of those pursuits. When I was short on time (which was almost always) I would hike the North Ridge trail where a 5K walk would get me up to over 1400 feet the 10K round trip with 1000 feet of elevation gain was something I could complete in less than 2 hours. Unfortunately, that trail has been closed for a couple of years due to a washout about a quarter of a mile up the trail, something that the park service lacks the resources to fix. If I were truly committed to hiking that trail, then the fact that it is closed would not have stopped me, but given the circumstances I was happy to pass it by.

The hills are still showing the signs of the last fire that came though here.

Instead I proceeded up Telegraph Canyon Road with my destination being the Easy Street trailhead, about 3.1 miles up canyon. Didn’t see any animals along the way, although I did see some signs of them.

Something rather large slithered across the road 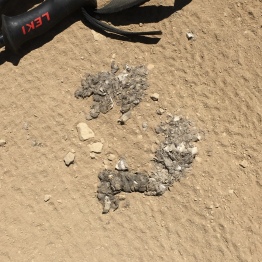 It was a rather hot and dusty hike, and on a weekday I only saw a scant handful of other hikers and bikers. Had I been a bit more ambitious I would have taken the short hike up the Easy Street trail. That trail makes a steep but short ascent through a small canyon into a meadow and connects to another entrance to the park at the end of Rimcrest Drive (off Fairmont) in Yorba Linda.

Easy Street trailhead–over the creek, up the canyon to the south edge of the park

Once I am back in full hiking shape my next plan will be to park by the Rimcrest entrance and hike down Easy Street to Telegraph Canyon road. From there it is just a short hike up the road to the Gilman Peak trail, a very steep trail that that will take me  to the summit at 1680 feet. From there a mile along the North Ridge trail will get me to Sycamore Canyon and a descent back the the road. That is a hike that is up to my full standards!