It is now 10:53 am, and I am sitting at a picnic table at the Mowich Lake campground. Kerry showed up at Bonnie’s in Bellingham about 10 last night. We ditched most of the Burning Man gear there, and then we drove down to an Econolodge in Buckley where Kerry, running buddy Wing, and I spent the night. 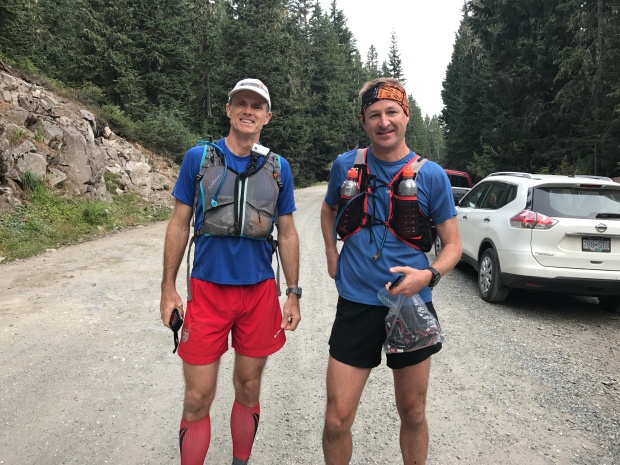 Kerry and Wing, about to hit the road

We were up by about 6 to scarf down the free hotel “breakfast”, and were on the road by 7. We drove here and arrived just after 8. There was a wedding photo shoot going on on small spit extending into beautiful, mirror-like Mowich Lake. Kerry and Wing did their last-minute gear checks and they were off on the Wonderland Trail. I will be picking them up tonight at Box Canyon. It’s a far piece by road, but only 50 miles by trail.

The mirror known as Mowich Lake

I took a short 2 mile (one-way) hike up to the Eagle Cliffs viewpoint. I think that must be the place where they take the postcard pictures from as the view was spectacular today. I also made a couple of friends in Jackie from Forestville and her daughter Christine.

A few minutes ago a party of 5 hikers emerged from the Wonderland trail to pick up a food cache. They had started at Box Canyon, where Kerry and Wing are headed, but it took them five days to get here. They had, of course, seen Kerry and Wing heading the other way and traveling rather light. It looks like the hikers have retrieved their cache, and there were cries of joy when they opened it and found the cold beers they have been craving.

That beer tastes so good after five days on the trail!

It is now 2:30 pm, and I am in Packwood waiting to check into the Packwood Inn, which will be our bivouac for the night. Check in isn’t until 3, so I am grabbing a burger at the Cliff Dropper, a small family owned burger joint. They said that business this summer has been exceptionally good, despite the fires. In fact they suspect that all the fires down in Oregon may have caused folks to come further north for their wilderness adventures. They came highly recommended locally, and I had a really good burger there.

Once I have eaten and checked in I will be heading back up into the park and over to Box Canyon. I will do some light hiking, and then hunker down to wait for Kerry and Wing. They anticipate an arrival time between 8 and 10 pm, which will be well after dark. Could be a cold wait!